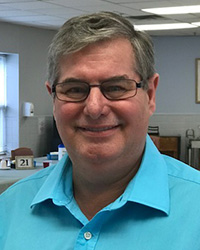 Bob has enjoyed working in the food service industry since he was a young teenager. From pot-washer to salad-maker, to graduate of the Culinary Institute of America, Bob realized his potential and mastered his craft.

Soon after completion of the course, Bob began his professional journey as a chef as a line cook, preparing up to 400 dinners every Saturday evening. Soon after, he was Banquet Manager and Sous Chef at a hotel in the New Jersey Meadowlands complex.

In the years following, Bob served at a hospital and a senior community. This is where he combined his passion for food with his compassion for people. Here is where he was recognized for his achievements with moves up to Executive Chef and Director of Food Service.

Bob’s goal is to continuously improve our dining experience with heightened attention to detail and training personnel to strive for culinary perfection through compassion.