“Why don’t you and some of your friends get together to see what you can do about starting a home where Armenian old folks can spend the last few years of their lives in comfort and in Armenian surroundings?”

It was June 16, 1930. Barely fifteen years had elapsed since the catastrophic Armenian Genocide had taken place, wiping out more than 1.5 million Armenians and driving the survivors to the shores of diaspora. On the national level, the decade had started with the 1929 stock market crash which ushered the nation into its worst economic depression.

Little did the visionary Mr. Hovsep Kassabian know that when he posed this question to his wife Ovsanna, and Mrs. Aroosiag Jarahian a local activist, that the very foundations of ANRC were being put in place.

The daily endeavors of the Armenian Americans, most of them survivors of the Armenian Genocide, were further aggravated by the understandable social constraints first generation immigrants inevitably faced. Despite these, Mr. Kassabian aspired to provide a community supported residence for the needy Armenian aged and found a responsive chord in the community. However, he died early and could not fulfill his aspiration, leaving a legacy in the hands of his wife and 7 women. It is through their determination that Hovsep Kassabian’s dream became a reality.

After Mr. Kassabian’s death, his wife Ovsanna, a woman of faith, contacted the North American Prelate of the Armenian Apostolic Church at the time, Archbishop Karekin I Hovsepian, who embraced the vision and carried on the work. She solicited the help of three like-minded women and at their first meeting in 1937, they studied the by-laws of the “Fritz Reuter Home for The Aged” and decided to meet its lawyer to gain some expertise in their new venture. Soon they sought out the assistance of Mrs. Aroosiag Jarahian who accepted their offer and subsequently became the first acting chairwoman of the Home.

Coincidentally, at the same time another group of Armenian women from the Bergen County Chapter of the Red Cross was working towards the same goal and like most women with a mutual goal, they decided to join forces. They met, drafted by-laws and adopted the name “Home for The Armenian Aged.” In 1938 they elected the first Board of Directors and the rest is history.

The very first resident to be admitted was 74-year-old Misak Shatafian, admitted on Wednesday, February 17, 1945. Misak’s son John was a police officer in Union City and had presented his father to Mrs. Aroosiag Jarahian beforehand. Misak Shatafian spent 6 years at the home. Born in Malatia, Turkey, he sought refuge to the United States where he raised his family. His obituary in the Armenian Home reveals that he was admitted ‘with crutches which he discarded after 6 months, due to good care and medical treatment. He took a keen interest in politics in which he was active at one time.’

Fifteen years after posing that fateful question, and 30 years after the Armenian Genocide brought ruin and devastation, the day had finally arrived for Hovsep Kassabian’s vision to be fulfilled. Out of the ashes came the birth of a star and today, the Armenian Nursing and Rehabilitation Center has been a comforting haven to many throughout the decades, with many more to come. 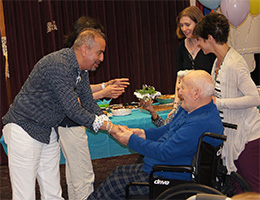